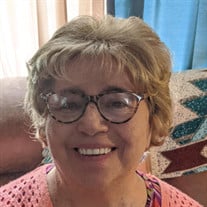 Carol Rae Heminger was born to Willis Earl Reed and Lorine Reed on March 19th, 1936. The youngest of 11 siblings, she was born and raised in Belleville, Illinois before moving to live with her elder brothers, who’d opened a gym in Hollywood California. Carol often recounted her fond memories of her time living in California, the friends she made, and her famous classmates at Hollywood High School. She is preceded in death by her brothers (Earl, Clifford, Willis, Ralph, Donald, Warren, Carl), sisters (Dot, Aleen, Larry), and first husband, Robert Earl Hill, whom she met in High School. They went on to have three children, Robert Earl Hill Jr., Vickie Lynn, and Tamara Rae. Carol married her second husband, Fred Heminger in October of 1981, The pair spent 22 years married until Fred’s death in 2003. Carol is survived by her eldest son, Robert Earl Hill Jr. and his wife Tegan of Dana Point, CA. Her daughter, Vickie Lynn Landers and her husband Rob of Lakewood, CA. Her daughter Tamara Rae Christman and her husband Randy of Acme, PA. Granddaughters Aimee Hill-Robichaud, Sherry Edwards (Chuck), Elizabeth Keslar (Jeremy), Jennifer Tomlinson (Greg), Amanda Heminger, Tuesdai Marie Hill (Brian). Grandsons Jeremy Heminger, John Christman(Alverta), Robert Hill III (Lexi), Jeffrey Grantham-Christman (Ferranti), Timothy Heminger. Carol spent many of her years surrounded by family and loved ones. She was blessed with many grandchildren, great-grandchildren, and great-great-grandchildren, and played a role in each of their lives. She often took pleasure in crocheting things for people close to her, sewing dresses for dolls and other crafts and hobbies. Carol adored ballet from a young age and danced with Selma Kissel Ballet Academy until she was 17. Carol was always one step ahead in terms of technology, whether it was buying her first computer in 1997 or learning how to use a smartphone and Facebook to keep up with her family and friends. She regularly wrote Queen Elizabeth II, corresponding and sending photos of her family, and great-grandson’s wrestling championships, and was fortunate enough to often receive replies from Her Majesty’s Lady-in-Waiting. Carol was also an avid fan of the Pittsburgh Steelers, and watched the games consistently, no matter where she was in the country at the time. Carol was a ten-time cancer survivor, and often spoke about her stories of being brave enough to overcome it time and time again. She was an inspiration to many of us, and a friend to all of us, and will be deeply missed by her family. While we may be parted now we can all rest easy knowing that we will be reunited someday. The family would like to extend its gratitude to Lighthouse Ministries of Acme, PA where Carol was a member for over 19 years. Family and friends will be received Thursday from 2-4 and 6-8 PM in the Mark C. Brooks Funeral Home Inc., at the corner of route 711 and 147 Municipal Building Rd., Melcroft (724-455-2310). There will be no visitation Friday. A Funeral Service will be held Saturday at 11:00 AM , in the Funeral Home, with Pastor Ron Hull and Pastor Carol Horton officiating. A committal service and interment will follow in the Mt. Nebo Cemetery, Champion. To leave a message or send condolences please visit our website at www.brooksfhmelcroft.com.

Carol Rae Heminger was born to Willis Earl Reed and Lorine Reed on March 19th, 1936. The youngest of 11 siblings, she was born and raised in Belleville, Illinois before moving to live with her elder brothers, who&#8217;d opened a gym in Hollywood... View Obituary & Service Information

The family of Carol Rae Heminger created this Life Tributes page to make it easy to share your memories.

Send flowers to the Heminger family.