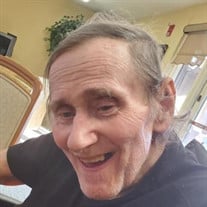 Charles W. Roadman, 83, of Stahlstown, passed away peacefully Monday, October 4, 2021 in UPMC Mercy Hospital, Pittsburgh. He was born March 23, 1938 in Kregar a son of the late John W. and Sarah Shawley Roadman. Prior to his retirement Charles worked as a Machinist for Hydro Carbide Tool Company in Latrobe. He also had worked as a logger and worked on pipelines. He was a Veteran of the U.S. Army having served during the Vietnam War. He like working with guns and became a gunsmith and worked on many different kind of guns. Charles was a member of the First Apostolic Church of Somerset. Charles will be sadly missed but fondly remembered by his loving family, his wife of 62 years Patricia Marie Miller Roadman, his children James Roadman and wife Alice of Kregar, Tammy Weyand of Champion, John Roadman and Angie of Kregar, Irvin Roadman and wife Lisa of Champion, Ann Shawley of Mt. Pleasant, Mary Roadman of Mt. Pleasant, and Stephen Roadman and fiancee Crystal of Kregar, his 16 grandchildren, his numerous great grandchildren, his siblings Martha Wilson of Maryland, Clara Jane Telford and husband William of Ligonier, L. Jean Shaner of Ligonier, Mary Harbaugh and husband John of Bradenville, and Linda Harbaugh and husband George of Ligonier, and numerous nieces and nephews. In addition to his parents Charles was predeceased by a daughter Janice McMaster and his brothers Elvin, Earl, Paul, John,Jr., Charles I., Harry, Elmer, and Walter Roadman. Family and friends will be received Thursday from 6-8 PM and Fri. from 2-4 and 6-8 PM in the Mark C. Brooks Funeral Home Inc., at the corner of route 711 and 146 Municipal Building Rd., Melcroft (724-455-2310) where a Funeral Service will be held Sat. at 11:00 AM with Bishop Daniel Judy officiating. Interment will follow in the Snowball Cemetery, Cook Twp., with Military Rites conducted by the Donegal VFW and American Legion Honor Guard.. In lieu of flowers the family asks that donation be made to the family, in memory of Charles W. Roadman.

Charles W. Roadman, 83, of Stahlstown, passed away peacefully Monday, October 4, 2021 in UPMC Mercy Hospital, Pittsburgh. He was born March 23, 1938 in Kregar a son of the late John W. and Sarah Shawley Roadman. Prior to his retirement Charles... View Obituary & Service Information

The family of Charles W. Roadman created this Life Tributes page to make it easy to share your memories.

Send flowers to the Roadman family.