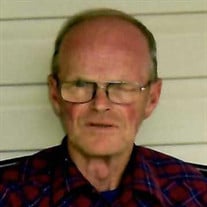 Edgar J. Rosenberry, 67, of Normalville passed away unexpectedly Weds. Feb. 24, 2021 in Highlands Hospital, Connellsville. He was born Nov. 7, 1953 in Connellsville a son of the late Charles Harding and Colette A. Conners Rosenberry. Prior to... View Obituary & Service Information

The family of Edgar J Rosenberry created this Life Tributes page to make it easy to share your memories.

Send flowers to the Rosenberry family.