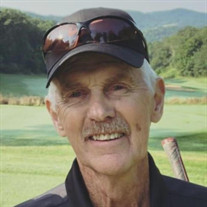 Edward Arthur Warner went home to be with his Lord and Savior on Thursday, July 1, 2021 at age 70. Although his last few years were marked by periods of illness, which he confronted bravely at each and every turn, there were far more good times than bad-and his final moments were spent surrounded by family and friends. His life began as the fourth child in what would eventually become a tribe of ten brothers and sisters-Gail, Dave, Rick, Ed, Ellen, Bob, Jim, Marsha, Donna and Mary. All of whom were raised by Ruth and Charles Warner on a scenic and sprawling family farm, in rural Pennsylvania. As a result, at a young age, Ed was taught the value of a hard day’s work and the universal benefits of having a quick wit-an integral part of his personality until the very end. In 1971, Ed married his childhood sweetheart, Sherlyn Fullem, to whom he remained a faithful and devoted husband for 49 joyful years. As a young man, he served in the Air Force during the Vietnam war and was stationed in Thailand shortly after his wedding. Unable to be apart, Sherry joined him overseas where they welcomed their first daughter, Heidi into a very different part of the world from which they were accustomed. Later, their son Heath and daughter Erica joined the family under more traditional circumstances once they moved back to PA. Their home, across the creek in “downtown” Mill Run is filled with 40+ years of blissful family memories-especially as the family grew to include his beloved grand-children Isabella, Seth, Dylan, Adelena and Juliette. Ed was a man of tremendous faith, which bolstered his spirit through his health challenges and cherished his membership at Indian Creek Baptist Church-where he served as a deacon for many years. In the Mill Run community, he was always quick to lend a helping hand and with his best friend, Junior Show, coached the local little league team (and the Dunbar all-stars) to a series of championship seasons. His love of sports was boundless, but he was most passionate about golf and basketball-both of which provided him numerous opportunities to laugh and compete with and against his many, many friends over the years. His family is absolutely gutted by the prospect of life without him, but his unwavering example of faith, resilience and unconditional love have provided our template to carry on. Family and friends are invited to a memorial service at Indian Creek Baptist Church on Tuesday, July 6, 2021 at 1pm with Pastor Chris McLaughlin officiating. A reception will follow at the Warner family farm at approximately 3pm. In lieu of flowers, donations can be made in his honor to the Fellowship Fund at Indian Creek Baptist Church (311 Baptist Church Road, Mill Run, PA 15464), which provides support to local families in need. Arrangements are under the direction of the Mark C. Brooks Funeral Home Inc., 146 Municipal Building Rd., Melcroft (724-455-2310). www.brooksfhmelcroft.com

Edward Arthur Warner went home to be with his Lord and Savior on Thursday, July 1, 2021 at age 70. Although his last few years were marked by periods of illness, which he confronted bravely at each and every turn, there were far more good times... View Obituary & Service Information

The family of Edward Arthur Warner created this Life Tributes page to make it easy to share your memories.

Edward Arthur Warner went home to be with his Lord and Savior...

Send flowers to the Warner family.