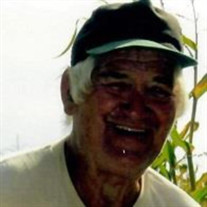 Eugene L. Richter, 86, of Normalville (Clinton) passed away peacefully Fri. July 31, 2020 at his home, while surrounded by his loving family. He was born on a Monday, May 7, 1934 in Clinton, a son of the late Albert Ray and Verna Grace Keefer Richter. Eugene was a lifelong resident on his farm in Clinton, leaving only for his stint in the Army, his honeymoon, and most recently for his hospitalizations. Eugene worked hard all of his life. He took over his father's business of selling farm products throughout the Connellsville area until 1977. He then worked at the Farm Bureau, Agway, and Pritts Feed Mill from where he retired at the age of 74. He was a Veteran of the U.S. Army and a member of the Clinton Church of God where he was a former Church Deacon. Eugene will be sadly missed but fondly remembered by his loving daughters Karen Richter of Clinton, Lois Kern and husband Robert of Friedens, and Pamela Hall and husband Charles of Clinton, and his son Albert Richter of Clinton. He is also survived by the joy of his life, his grandson John Kern and his wife Noemi (favorite granddaughter-in-law) of Los Angeles,CA. and his favorite granddaughter Erin Kern and companion Joshua Baker of Beaver Falls, and step grandchildren Jeremiah Hall, Rachael Hall and companion Bobby Cassel, and step great grandchildren Emma Hall, Abigail Cassel, and Lily Cassel. Also surviving are two sisters Pearl Haines of Mt. Pleasant and Lorraine Weimer and husband Lee of Tempe, AZ., and numerous nieces and nephews. In addition to his parents, Eugene was predeceased by his wife Connie Lou Shipley Richter on Jan. 14, 2010, four sisters Goldie Mowry, Myrtle Herman, Bessie Richter, and Margaret Wingrove, brothers Lawrence Richter and Stanley Richter, and infant sister Esther Marie in 1926 and an infant brother Charles Herbert in 1937. Family and friends will be received Mon. from 2-8 PM in the Clyde Brooks Funeral Home Inc., at the corner of Route 711 and 146 Municipal Building Rd. Melcroft (724-455-2310) where a Funeral Service will be held Tues. at 11:00 A.M., with Pastor Richard Helsel officiating. A Committal Service and Interment will follow in the Indian Creek Baptist Cemetery, Mill Run. In lieu of flowers the family suggests donations be made to the Clinton Church of God, 406 Buchanan Rd., Normalville, PA. 15469, in memory of Eugene L. Richter. To leave a message or send condolences please visit our website at www.brooksfuneralhomes.com

Eugene L. Richter, 86, of Normalville (Clinton) passed away peacefully Fri. July 31, 2020 at his home, while surrounded by his loving family. He was born on a Monday, May 7, 1934 in Clinton, a son of the late Albert Ray and Verna Grace Keefer... View Obituary & Service Information

The family of Eugene L. Richter created this Life Tributes page to make it easy to share your memories.

Send flowers to the Richter family.