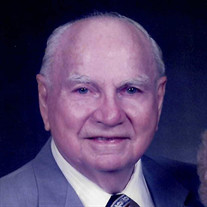 Frank Ward Shirey, 97 of Greensburg, formerly of Champion, passed away peacefully Saturday August 7, 2021 in Kelly's Personal Care Home, Greensburg. He was born November 29, 1923 in Clearfield, Pennsylvania a son of the late William Roy and Barbara Ellen Selfridge Shirey. Frank was a graduate of Clearfield High School with the class of 1941. He had many outstanding wrestling achievements including winning the State Championship during his senior year. He was enshrined in the Pennsylvania Sports Hall of Fame in 2003. Frank worked as an Engineer for the WABCO Corp. in Wilmerding for many years. He was a Veteran of the U.S Army Air Corps having served as a Bomber Pilot during WW II, having flow B-24's and B-17's. He received many medals, awards , and citations for his contribution to the war effort and flew 50 missions in the European Theatre of action. He was a member of the Valley VFW #12019 and a member of the Calvary United Methodist Church in Acme. Frank was also a member of the Irwin Lions Club, where he served as president of the club from 1973 - 1974 and a member of the Wally Byam Airstream Club. Frank will be sadly missed but fondly remembered by his loving wife Pauline Louise Shimmel Shirey, whom he celebrated their 76th wedding anniversary on June 6, 2021, his children Ray A. Shirey (Billie K. Long) of New Stanton, Karen J. Sarge of North Huntingdon, Larry A. Shirey (Mary Kay) of North Huntingdon, and Ellen L Kohlman (Jack Kohlman) of White, his 8 grandchildren, and his 14 great grandchildren. In addition to his parents Frank was predeceased by his son Donald Roy Shirey in January of 2015, his sisters Martha Mae Zigler, Ethel Owens, and Aura Lee Owens Dore, and his brothers Clarence Ray Shirey, Guy Clark Shirey, and Glen Shirey. Family and friends will be received Wednesday from 2:00 - 8:00 PM in the Mark C. Brooks Funeral Home Inc., at the corner of route 711 and 146 Municipal Building Rd., Melcroft (724-455-2310) where a Funeral Service will be held Thursday at 11:00 AM, with Pastor Jeri A. Penrod officiating. A committal service will follow in the Calvary Cemetery, Acme, with military services bestowed by the Valley VFW #12019 Honor Guard. In lieu of flowers the family suggests donations be made to the Valley VFW #12019, P.O. Box 428, Normalville PA. 15469, in memory of Frank W. Shirey. To leave a message or send condolences please visit our website at brooksfhmelcroft.com

The family of Frank Ward Shirey created this Life Tributes page to make it easy to share your memories.

Send flowers to the Shirey family.