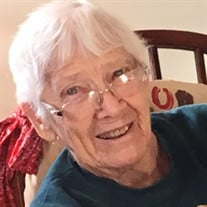 Grace E. "Mowry" Cooper, 86, of Normalville passed away Saturday, February 12, 2022 in Highlands Hospital, Connellsville. She was born February 16, 1935 in White a daughter of the late Earl and Edith Brown Mowry. Grace was the former owner/operator of Grace's Beauty Shop with locations in both Indian Head and Mill Run. She also was a partner, along with her late husband Jerry Cooper, in the "Jerry Cooper Ranch' in Indian Head. Grace was a member of the Millertown Community Church. She liked gardening, crocheting, reading, and most of all spending time with her grandchildren and great grandchildren. Grace will be sadly missed by her loving family, her daughter Dareen Stout and husband Daniel of Normalville, her grandchildren Daniel Stout, Jr. and wife Heidi of Normalville and Christina Pribisco and husband Daniel of Shahlstown, her great grandchildren Madison, Harper, and Rosilyn Stout, and Jase, Josie, and John Pribisco, her sisters Millicent Beach of Morgantown, PA., LaVerne Rupnik (Larry) of Export, Kay Bittner of Mill Run, Dianne Lawrence (Jim) of Somerset, and Vonnie Meyers (Dave) of Somerset, her brothers Larry Mowry of Mill Run and Joe Mowry (Audrey) of Mill Run, her sisters and brothers-in-law Sharon Monahan (Pat) of Connellsville, Kathleen Dugan of Dunbar, Ken Cooper of Dunbar, Farrel Cooper of Masontown, Phillip Cooper (Lena) of Lemont Furnace, and Steve Cooper of Connellsville, and many nieces and nephews. In addition to her parents Grace was predeceased by her husband Gerald Franklin "Jerry" Cooper on December 3, 2012, her infant daughter Coletta Cooper, and her siblings Retha Craig, Garnet Rowan, Wade Mowry, and Betty Oakman. Family and friends will be received from 2:00 PM to 8:00 PM on Wednesday in the Mark C. Brooks Funeral Home Inc., at the corner of route 711 and 146 Municipal Building Rd., Melcroft (724-455-2310) where a Funeral Service will be held Thursday at 11:00 AM with Pastor Ralph Miller and Pastor Gordon Nelson co-officiating. A committal service and interment will follow in the Mt. Auburn Cemetery , Dunbar. In lieu of flowers the family suggests donation be made to the Millertown Community Church, 224 Millertown Rd., Normalville, PA. 15469, in memory of Grace E. Cooper. To leave a message or send condolences please visit our website at www.brooksfhmelcroft.com

Grace E. "Mowry" Cooper, 86, of Normalville passed away Saturday, February 12, 2022 in Highlands Hospital, Connellsville. She was born February 16, 1935 in White a daughter of the late Earl and Edith Brown Mowry. Grace was the former owner/operator... View Obituary & Service Information

The family of Grace E. Cooper created this Life Tributes page to make it easy to share your memories.

Send flowers to the Cooper family.