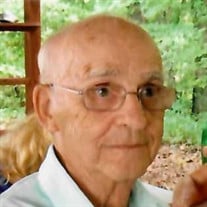 Herbert Duane "Herb" Pritts, 91, of Normalville passed away peacefully Sat. Nov. 28, 2020 in Excela Health Westmoreland Hospital, Greensburg. He was born May 27, 1929 in Indian Head a son of the late Calvin and Beulah Keller Pritts. Herb was a graduate of Connellsville High School with the class of 1948. Prior to his retirement he worked as a Carpenter. He was a Veteran of the Korean War having served in the U.S. Army and was a member of the Donegal VFW #6743. Herb was a member of the Normalville United Methodist Church and had served on the church board for many years. Herb liked gardening and hunting. He was a wonderful husband, father, grandfather, great grandfather, and brother and will be sadly missed but fondly remembered by his loving wife of 61 years, Barbara A. Brooks Pritts, his children Randy D. Pritts and wife Louise of Scottdale, Jeff Pritts and wife Joy of Greensburg, and Jacki Pritts of Normalville, his grandchildren Hallie Pritts and husband Aaron Jentzen of Pittsburgh, Christopher Pritts and wife Rong of Scottdale, Mya Pritts of Greensburg, and Max Pritts of Greensburg, his great grandchildren Cian and Leaf Pritts, and Zinnia Jentzen, his sister Roberta Pritts Heide, and several nieces and nephews. In addition to his parents Herb was predeceased by his sister Helen Keslar Krumanacker, and his brothers Harold C., Franklin, and J. Neal Pritts. Family and friends will be received Tues, from 2-4 and 6-8 PM and Weds. from 10 - 11 AM, the hour of a Funeral Service, in the Mark C. Brooks Funeral Home Inc, at the corner of route 711 and 146 Municipal Building Rd., Melcroft (724-455-2310) with Pastor Mark Sholtis officiating. A committal service and interment will follow in the Normalville Cemetery. Military rites will be conducted by the Donegal VFW #6743 Honor Guard. In lieu of flowers the family suggests donations be made to the Normalville U.M. Church, 3270 Springfield Pike, Normalville, PA. 15469, in memory of Herbert D. Pritts. To leave a message or send condolences please visit our website at www.brooksfhmelcroft.com

Herbert Duane "Herb" Pritts, 91, of Normalville passed away peacefully Sat. Nov. 28, 2020 in Excela Health Westmoreland Hospital, Greensburg. He was born May 27, 1929 in Indian Head a son of the late Calvin and Beulah Keller Pritts. Herb was... View Obituary & Service Information

The family of Herbert Duane Pritts created this Life Tributes page to make it easy to share your memories.

Send flowers to the Pritts family.