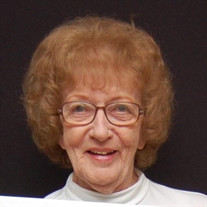 Joanne Ruth (Budd) May, 89, of Melcroft passed away Thursday March 17, 2022 in UPMC Presbyterian Hospital, Pittsburgh. She was born May 8, 1932 in Dickerson Run a daughter of the late Bruce and Catherine Gray Budd. Joanne attended the former Dunbar Twp. High School. She worked as a Beautician for several years and was also the owner/operator, along with her late husband Earl, of the former West Side Bakery in Connellsville and Brenda Jo Candies. Joanne was a member of the Greenwood United Methodist Church in Connellsville. She along with her husband Earl were member of the Happy Wonders Camping Group. They hosted many Labor Day outings for the group at their home. Joanne loved traveling with her husband in their motor home, she enjoyed e-mailing her friends, spending time with her family, she loved her cats Sheba and Bessie, and especially loved her children, grandchildren, and great grandchildren. Joanne will be sadly missed but fondly remembered by her loving family, her children Karen Bigam and husband Dale of Melcroft and Brenda Breidert and husband Jim of Fort Wayne, IN., her grandchildren Kelli Richter and husband Mike, Jeffrey Bigam and Heather, Jamie Shupp and husband Jason, Sherri Klingensmith and husband Ryan, Patrick Valencheck and Melissa, and Seth Bigam, her great grandchildren Karissa Murphy, Kassi Richter, Noah Richter, Paige Klingensmith, Knighton Klingensmith, and Miles Shupp, her brother Dale Budd, and several nieces and nephews. In addition to her parents Joanne was predeceased by her husband Earl H. May on March 14, 2013, her daughter Sharon Valencheck, and her grandson Robert Stevens. Family and friends will be received Monday from 11:00 AM - 1:30 PM, the hour of a Funeral Service in the Mark C. Brooks Funeral Home Inc., at the corner of route 711 and 146 Municipal Building Rd., Melcroft (724-455-2310) with Pastor Ed Mikkelsen officiating. A committal service and interment will follow in Green Ridge Memorial Park, Pennsville. In lieu of flowers the family asks that donations be made to the Indian Head Church of God, 691 Indian Creek Valley Rd., Indian Head, PA. 15446, in memory of Joanne Ruth May.

Joanne Ruth (Budd) May, 89, of Melcroft passed away Thursday March 17, 2022 in UPMC Presbyterian Hospital, Pittsburgh. She was born May 8, 1932 in Dickerson Run a daughter of the late Bruce and Catherine Gray Budd. Joanne attended the former... View Obituary & Service Information

The family of Joanne Ruth May created this Life Tributes page to make it easy to share your memories.

Joanne Ruth (Budd) May, 89, of Melcroft passed away Thursday...

Send flowers to the May family.