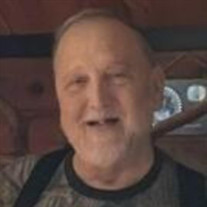 Larry Marvin Peck, 74, of Mill Run, passed away Thursday, January 13, 2022 in the Allegheny General Hospital, Pittsburgh. He was born March 17, 1947 in Connellsville a son of the late Samuel D. and Mary A. Pritts Peck. Larry was a graduate of Connellsville High School and received his degree in Business from Penn State University Fayette Campus. He was a Veteran of the U.S. Army having served during the Vietnam War. Larry started his working career as a Department Manager at the former Troutman's Department Store in Connellsville. He later worked at the former Volkswagen Assembly Plant in New Stanton, and then later retired from U.S. Steel Clairton Works. Larry was also the owner/operator of Peck's Shootin Service in Mill Run for many years. Larry was a member of the Critchfield Alliance Church in Mill Run. Larry was a avid hunter, fisherman, and outdoorsman. He will be sadly missed but fondly remembered by his loving family, his wife Peggy Sherbondy Peck, his son Adam Peck and wife Barbara of Mill Run, his grandchildren Isabella and Sydnee Peck, his nephew Jeffrey Peck and wife Susan of Normalville, several other nieces and nephews, and a wealth of extended family and loved ones, and many friends. In addition to his parents Larry was predeceased by his first wife Sue Bigham Peck on September 9, 2016, his sisters Berniece Pilarcik, Joy Zavatsky, and Irene Bigham, and his brothers Merle E. Peck, Ronald F. Peck, Delbert Peck, and an infant brother Ivan Peck. Family and friends will be received Monday from 2-8 PM in the Mark C. Brooks Funeral Home Inc., at the corner of route 711 and 146 Municipal Building Rd., Melcroft (724-455-2310) where a Funeral Service will be held Tuesday at 12:00 PM, with Pastor Randy Newell officiating. A committal service and interment will follow in the Normalville Cemetery. In lieu of flowers the family suggests donations be made to one's own church in memory of Larry M. Peck.

Larry Marvin Peck, 74, of Mill Run, passed away Thursday, January 13, 2022 in the Allegheny General Hospital, Pittsburgh. He was born March 17, 1947 in Connellsville a son of the late Samuel D. and Mary A. Pritts Peck. Larry was a graduate of... View Obituary & Service Information

The family of Larry Marvin Peck created this Life Tributes page to make it easy to share your memories.

Send flowers to the Peck family.