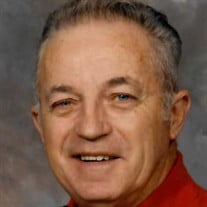 Lewis L. Collins, 87, of Mill Run passed away peacefully Sun. Aug. 30, 2020 at his home , while surrounded and comforted by his loving family. He was born July 14, 1933 in Confluence a son of the late John and Mae Rugg Collins. Lewis worked as a mechanic for most of his life. He first worked as a mechanic for Mastowski and Fullem Lumber Co and later for Sisler Equipment Company where worked as a mechanic and salesman. He was a Veteran of the Korean War having served in the U.S. Army. He attended the Bear Run Church of the Brethren. Lewis loved to tinker with and fix various things. He liked hunting and fishing and spending time with his family and friends , especially his grandchildren. Lewis will be sadly missed but fondly remembered by his loving family, his wife of 65 years Frances L. Steyer Collins, his children Debbie Kooser and husband Stephen of Mill Run, Dawna Firestone and husband Don of Puyallup, WA., and Terri Perando and husband Wolf of Deep Creek, MD., his grandchildren Joe, Kooser, Jenny Kooser, Erin Minnick, Elijah Firestone, Calvin Hilliard, and Dalton Perando, his great grandchildren Jaxson and Collins Minnick, and his sister Ruth Collins of Phoenix, AZ. In addition to his parents Lewis was predeceased by his brothers John, Jim, and Clarence Collins. Family and friends will be received Weds. from 2-4 and 6-8 PM in The Clyde Brooks Funeral Home Inc., at the corner of route 711 and 146 Municipal Building Rd., Melcroft (724-455-2310) where a Funeral Service will be held Thurs. at 11:00 AM with Pastor Robert Stein officiating. A committal service and interment will follow in the Maple Summit Cemetery. In lieu of flowers the family suggests donations be made to a charity of one choice, in memory of Lewis L. Collins. To leave a message or send condolences please visit our website at www.brooksfuneralhomes.com

Lewis L. Collins, 87, of Mill Run passed away peacefully Sun. Aug. 30, 2020 at his home , while surrounded and comforted by his loving family. He was born July 14, 1933 in Confluence a son of the late John and Mae Rugg Collins. Lewis worked... View Obituary & Service Information

The family of Lewis L. Collins created this Life Tributes page to make it easy to share your memories.

Send flowers to the Collins family.