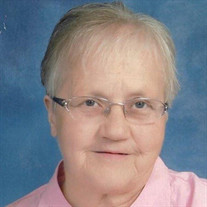 Martha Ann Shultz, 70, of Normalville, passed away Sunday ,March 13, 2022 at her home. She was an inspiration to many and a caring wife , mother, grandmother, sister, and friend. Martha was born June 23, 1951 in Normalville, the youngest of seven children to the late William I. and Anna Prinkey Fulton. She was a graduate of Connellsville High School with the class of 1969. She was a devoted Christian, serving God. She was a lifetime member of the Clinton Church of God and loved gardening, flowers, and taking care of her family. Martha was very involved in the raising of all of her eight grandchildren. She worked various jobs throughout her life. The first job was in a sewing factory in Connellsville named Caroline's. She was a waitress for Bud Murphy's, Miedel's Restaurant, and Seven Springs Resort. She was a business owner of M.A. Shultz Lumber, a cashier at Country Market and Miller's Grocery in Normalville. Martha was a two time survivor of Breast Cancer. Martha is survived by her loving husband, of 51 years, Ernest A. Shultz, her daughter Tammy Mountain and husband John of Melcroft, her son Anthony "Tony" Shultz and wife Amanda of Normalville, and daughter Joni Shultz and fiancee Donald Keefer of Normalville, her grandchildren Aaron Shultz, Autumn Keefer, Ethan Shultz, MaryEllen Mountain, Andy Shultz, Kaitlin Shultz, Michael Mountain, and Brittany Mansberry, her great grandchildren Gina Gallentine, Adelyn Mansberry, and Aiden Mansberry, her sister Lillian Mae Stois, her brother William I. Fulton and wife Carrie (Sally), her aunt Florence (Madeline) Prinkey, her sister-in-law Brenda Fulton, her brother-in-law Melvin Shultz, and numerous nieces, nephews, family, and friends. In addition to her parents Martha was predeceased by her sisters Bessie I. Richter, Mary C. Shultz, and Dorothy Whipkey, and her brother Robert L. Fulton. Martha will be extremely missed. Family and friends will be received Thursday from 2-8 PM in the Mark C. Brooks Funeral Home Inc., at the corner of route 711 and 146 Municipal Building Rd., Melcroft (724-455-2310) where a Funeral Service will be held Friday at 11:00 AM with Pastor Morgan Kelly and Pastor Joseph Wingrove co-officiating. A committal service and interment will follow in the Dan Snyder Cemetery, Saltlick Twp..

Martha Ann Shultz, 70, of Normalville, passed away Sunday ,March 13, 2022 at her home. She was an inspiration to many and a caring wife , mother, grandmother, sister, and friend. Martha was born June 23, 1951 in Normalville, the youngest of... View Obituary & Service Information

The family of Martha Ann Shultz created this Life Tributes page to make it easy to share your memories.

Send flowers to the Shultz family.