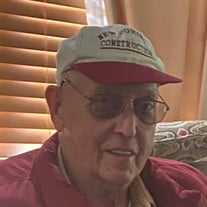 Melvin Thomas "Tom" Shultz, 82, of Normalville, passed away unexpectedly Sunday April17, 2022 at his home. He was born July 10. 1939 in Clinton a son of the late Simon and Bertha E. Richter Shultz. Prior to his retirement Tom worked as a Construction Foreman/Superintendent through Laborers Union Local 1058 in Pittsburgh. Tom did several different jobs during his construction career including working as a Blaster, and moving large amount of soil with heavy equipment, which earned him the nickname of "Dr. Dirt". He attended the Clinton Church of God. Tom will be sadly missed but fondly remembered by his loving family, his children Stacie Keefer of Mt. Pleasant, Anna Upton and husband Brian P. of Connellsville, and Neal Shultz and wife Bobbie of Normalville, his grandchildren Jonathan, Ryan and Georgann, Amanda and Alby, Ava, Jaydra, and Carson, his great grandchildren Nathan, Blake, Sarah, Mackenzay, Bransyn, Kylie, Jackson, Parker, Delaney, Tommy, Haylee, Rylynn, and Jacob, his brothers Ernest A. Shultz of Normalville and Simon Shultz, Jr. and wife Grace of Normalville, his sisters Eleanor Laws and husband Alvis of Normalville and Mary Phillips and husband John of White, and several nieces and nephews. In addition to his parents Tom was predeceased by his wife Mary C. Fulton Shultz on June 28, 2017, his daughters Janice Shultz and Carol Hurley, his sisters Naomi Prinkey and Twila Eiford, and his brother Delmas Shultz. Family and friends will be received Wednesday from 6-8 PM and Thursday from 2-4 and 6-8 PM in the Mark C. Brooks Funeral Home Inc., at the corner of route 711 and 146 Municipal Building Rd., Melcroft (724-455-2310) where a Funeral Service will be held Friday at 11:00 AM, with Rev. Joseph Wingrove officiating. A committal service and interment will follow in the Dan Snyder Cemetery. To leave a message or send condolences please visit our website at www.brooksfhmelcroft.com

Melvin Thomas "Tom" Shultz, 82, of Normalville, passed away unexpectedly Sunday April17, 2022 at his home. He was born July 10. 1939 in Clinton a son of the late Simon and Bertha E. Richter Shultz. Prior to his retirement Tom worked as a Construction... View Obituary & Service Information

The family of Melvin Thomas "Tom" Shultz created this Life Tributes page to make it easy to share your memories.

Send flowers to the Shultz family.