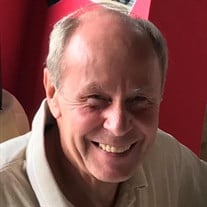 Richard (Dick) Thomas Barron, 73, of Champion, PA passed at home on Monday, October 11, 2021. Born on May 23, 1948 in Belle Vernon, Dick was the son of Mildred (Mutich) and Bernard Barron. In addition to his parents, he was preceded in death by a cousin, Ronald Toth, who was like a brother to him. He is survived by his loving sister, Bernadette L. Barron, as well as many cousins and dear friends. Dick was a 1966 graduate of Belle Vernon Area High School (Belmar) and was very much involved with the class reunions. Dick served in the US Army, 32nd Artillery with active duty in Vietnam in 1968 and 1969. He was awarded the Army Commendation Metal for Meritorious Service. He was a member of the Donegal VFW and was a very proud supporter of the Wounded Warrior Project. He was an initiator of the Wounded Warrior Patrol Program at Seven Springs, inviting veterans and their families to the resort for vacations. After returning from the Army, Dick joined the family and staff at Seven Springs at the ski patrol where he later became Director. He dedicated 50 years of loyal service on the mountain. His induction into the Pennsylvania Winter Sports Hall of Fame in 2014 was a culmination of his many years of service to the Pennsylvania and National Ski Patrol. Everyone who met Dick became his friend, and he was a mentor to many. It may have been cold on that mountain, but a smile from Dick Barron would always warm your heart. Dick’s love and remarkable eye for the outdoors turned into an acclaimed landscaping business, and with his sister, they formed Barron’s Landscaping and Floral, which provided much beauty to the Laurel Mountain. Dick’s next adventure was converting an old barn into Barron’s Red Silo on his majestic farmlands. It has become one of the most sought-after event venues in the Laurel Mountain. There will be no public viewing or services. Memorial contributions may be made if desired to the Wounded Warrior Foundation. Arrangements by Mark C. Brooks Funeral Home Inc. 146 Municipal Building Rd., Melcroft.

Richard (Dick) Thomas Barron, 73, of Champion, PA passed at home on Monday, October 11, 2021. Born on May 23, 1948 in Belle Vernon, Dick was the son of Mildred (Mutich) and Bernard Barron. In addition to his parents, he was preceded in death... View Obituary & Service Information

The family of Richard Thomas Barron created this Life Tributes page to make it easy to share your memories.

Send flowers to the Barron family.