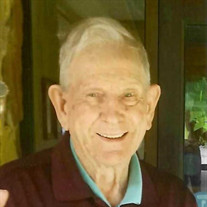 Vernon Pritts passed away peacefully on December 13, 2020 after an extended illness. Vernon, son of the late Earnest and Blanche (Hostetler) Pritts, was born on March 20, 1930 in Indian Head into a family that eventually consisted of five other brothers and two sisters. All of these children were well behaved and never caused any trouble for their parents, school teachers or community. At least that is what their children were told. After graduating from Connellsville High School in 1947, Vernon worked for a short time in the coal mines in Melcroft. Soon thereafter, he received an offer he couldn’t refuse from the U.S. Government to serve in the Army. He was stationed on the front lines during the Korean War and survived a brutal winter there. After returning to the United States, he married Vivian Dix on July 23, 1955. Now employed as a union carpenter, Vernon helped to build his own house. He was an extremely hard worker who would travel up to 90 miles one-way to construction sites. Some of the structures erected with the help of Vernon’s hands are the US Steel Building, the cooling towers at the Shippensburg Power Plant, and a few buildings on both the Pitt and Carnegie Mellon University campuses. Vernon spent many Sunday afternoons visiting relatives or exploring a dirt road somewhere up in the mountains and finding his way back home. With luck, Sunday evenings after church ended at Harkcom’s Dairy Bar. One of Vernon’s greatest joys was to see his extended family gathered around the dinner table for a holiday celebration. A highlight of his life was a family trip to Alaska for his 50th wedding anniversary and a road trip to the western United States with his sister Jane and her husband, Bill. Vernon was an avid fan of the Pittsburgh Steelers and Pirates. His Saturdays often were spent helping a neighbor with a weekend project. He was a member of VFW Post 12019. He attended the Indian Head Church of God and served as youth leader, elder, teacher and superintendent of Sunday School. Few knew how nervous he was when speaking in front of people. Although public speaking was not his strong suite, he delighted in one-on-one political and religious discussions. Another joy was giving things away to others. He took delight in sharing what he had, especially something that he had grown or built himself. Even as the last vestiges of his memory faded away, he would find something to offer visitors who came to see him in assisted living. Those of us who remain on Earth still have our memories, and we recall a very devout man who worked extremely hard, loved his wife and family, welcomed the stranger, and was generous beyond measure. Vernon is survived by his wife (Vivian), siblings Jack, Clair, Kyle, Jane McMillen and Betty Freed, and predeceased by brothers Merle and Blaine. His children are Marvin (Allison), Raeline (Ronald) and Keith (Dotty) Pritts; grandchildren Jared (Renee), Devin, Eric (Lauren), Alyssa, and Kevin Pritts; Ashlee (Matt) Crum and Natalie (Aaron) Myers; and great-grandchildren Kelsey and Avery Pritts, and Alivia and Nolan Crum. Family and friends are invited to attend a graveside service on Saturday, December 19, 2020 at 11:00 am at the Mt. Nebo Cemetery with Pastors Douglas Nolt and Ed Mikkelson officiating. All those attending are asked to distance and wear masks. Military services will be accorded by VFW #12019. Arrangements are under the direction of Mark C. Brooks Funeral Home Inc., 146 Municipal Building Rd., Melcroft. Donations in Vernon’s memory can be made to Camp Sonrise Mountain, Rebecca Dix, Treasurer, PO Box 231, Indian Head, PA 15446.

Vernon Pritts passed away peacefully on December 13, 2020 after an extended illness. Vernon, son of the late Earnest and Blanche (Hostetler) Pritts, was born on March 20, 1930 in Indian Head into a family that eventually consisted of five other... View Obituary & Service Information

The family of Vernon R. Pritts created this Life Tributes page to make it easy to share your memories.

Vernon Pritts passed away peacefully on December 13, 2020 after...

Send flowers to the Pritts family.