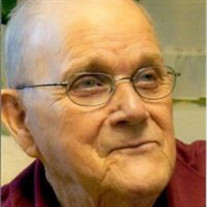 William “Bill” McMillen, 92, of Indian Head, went home to be with his Savior and Lord on Sunday morning, July 26, 2020 at Excela Health Frick Hospital with family at his side. Bill was born on March 21, 1928 in Rogers Mill, PA. He was the son of the late Daniel and Bertha (Pritts) McMillen. Bill served in the U.S. Military from March of 1946 until December of 1948, serving in the Army, spending most of his time in Germany, Belgium and Italy. He was responsible for repairing heavy machinery, and always said he enjoyed his time in the service and was happy to serve his country. On December 11, 1954, he married his beloved wife, Patricia “Jane” Pritts. Bill worked for several years in the lumber yard and then worked on the Railroad. After this, he drove truck for more than 20 years. When business slowed down, he returned to the lumber yard until he eventually joined Seven Springs Mountain Resort for nearly 20 years, working primarily in the ski rental during winter and the golf course during summer months. Bill was a regular attendee of the Indian Head Church of God and he also served for many years with the Saltlick Township Volunteer Fire Department. Bill’s genuine love and compassion was expressed quietly to those around him. Whether at home or at work, he lived out his faith every day by loving God and loving people, and this was clearly evident to his family and friends. Bill is survived by his wife, Jane, and their children Douglas and Debra McMillen of Acme, David and Barbara McMillen of Acme, and Darrin and Cathi McMillen of Pittsburgh. He is also survived by his youngest brother Thomas (and Pat) McMillen, and many nieces and nephews. He was preceded in death by his parents, his sister Eleanor “Sis” Johnson, his two younger brothers, Daniel “Junie” and Robert “Bob” McMillen. The family will receive visitors from 1-8 PM Weds. in the Clyde Brooks Funeral Home Inc., at the corner of route 711 and 146 Municipal Building Rd., Melcroft, where a Funeral Service will be held Thurs. at 11:00 AM, with Pastor Douglas Nolt and Pastor Ed Mikkelsen officiating. A Committal Service and interment will follow in the Mt. Nebo Cemetery, Champion, with Military Services conducted by the Valley VFW #12019. In lieu of flowers the family suggests donations be made to the Indian Head Church of God,691 Indian Creek Valley Rd., Indian Head, PA. 15446, in memory of William "Bill" McMillen. To leave a message or send condolences please visit our website at www.brooksfuneralhomes.com

The family of William "Bill" McMillen created this Life Tributes page to make it easy to share your memories.

Send flowers to the McMillen family.